The Parish Life Committee is charged with the responsibility of encouraging fellowship and activities within the church family by sponsoring a variety of events throughout the year geared toward bringing our parish family closer together.

A festive annual event hosted by CEC’s vestry and the Parish Life Committee that features gourmet foods, roasted oysters, a raffle, music and other fun activities. This fund raising event is popular not only with our parishioners, but also is widely attended by friends and family from the community. Held Easter morning between early and later services giving the entire congregation an opportunity to celebrate the risen Lord together. An egg hunt follows the later service.

Blessing of the Animals 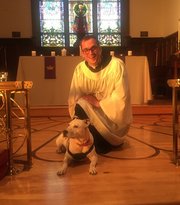 On the Sunday closest to the Feast of St. Francis, Christ Church invites critters of all sorts to gather for the annual Blessing of the Animals. With the help of the youth our pets come to the Gathering Place behind the church to receive a blessing and a St. Frances medal.

The church routinely organizes progressive dinners which held at the homes of church members. The evening begins at one home for appetizers and cocktails progressing to another residence for dinner and concludes with coffee and dessert. 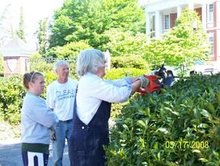 Periodically, under the direction of the Junior Warden, members of our parish mobilize to spruce up the grounds of our campus. All ages are encouraged to participate.

Each summer the congregation gathers together for recreation and fellowship with an annual picnic organized by the Parish Life Committee. In the past, the parish life committee has hosted pool parties as well as a day of canoeing and kayaking on the Smith River concluding with a barbeque dinner with games and music.

This year the picnic will be held on September 8, 2019 and will be combined with Kick-Off Sunday  for Sunday School Programs.

Ava Neaves Gardner graduated from St. Catherine’s School in Richmond, VA. She will be attending the University of Colorado in Boulder this fall. Ava is the daughter of Graham and Jennifer Gardner and the granddaughter of Marty and the late Ben Gardner.

Brooks Kahn graduated from Discovery High School in Hickory, NC. He will be attending Virginia Tech in the fall. Brooks is the son of Jeff and Carie Holland Kahn and the grandson of Morgan and Barbara Holland.

Alaina Ann Scouras graduated from Franklin County High School. She will be attending Patrick Henry Community College in the fall. Alaina is the daughter of Ludy and Pete Scouras and is the granddaughter of Dr. and Mrs. George P. Scouras and Jim and Joanne Nichols.

Ann Mason Smith graduated from Saint Mary’s School in Raleigh, NC. She will be attending Auburn University in the fall. Ann Mason is the daughter of Will and Susan Smith.

Landon Wagoner graduated from Carlisle School. He will be attending Randolph College in Lynchburg to play basketball and major in Sports Medicine. Landon is the son of Ginger S. and the late Ronnie L. Wagoner and the grandson of Sue W. Rosser.

Alayna Gayle Williams graduated from Magna Vista High School and Patrick Henry Community College with her Associate of Science Degree. She will be attending Virginia Tech in the fall, double majoring in Physics and French. Alayna is the daughter of Andy and Tara Williams.

Aurora Wolchko graduated from Bassett High School as a Graduate of Distinction,  and she has earned an Associate's degree in Applied Science from Patrick Henry Community College. She was a member of the  varsity swim team and the varsity soccer team for 4 years. She has served CEC as an acolyte,  nursery attendant, and helped with Loaves and Fishes meals. She will be attending Old Dominion University to study Marine Biology. Aurora is the daughter of John and Liz Wolchko.

Lester Coleman graduated from UVA’s Frank Batten School of Leadership and Public Policy with a Masters of Public Policy. Lester is the son of Nubby and Beverley Coleman.

Michael Gray graduated from UNCG as a DNP (Doctor Nurse Practitioner). His parents are Tee and Mitzi Gray and Michael is the grandson of Susan Critz.

Kate Holland graduated from UVA with a major in Politics with a concentration in Conflicts. She will be going to grad school at UVA to study Masters in Politics, Religion & Conflict. Kate is the daughter of Mark and Carole Holland and the granddaughter of Morgan and Barbara Holland.

Grace Isley, Raleigh, NC, graduated with a post-graduate degree In Global Luxury Management and Brand Marketing from the Poole College of Management at North Carolina State University. She is currently working on her second post-graduate degree from Skema School in Paris, France, and hopes to complete this program in December, 2020. Grace is the daughter of Laura and Philip Isley and the granddaughter of Linda and Ran Isley.

Sophia Leigh Mazurek graduated from Appalachian State University in Boone, NC. She has earned an undergraduate degree with a BS in Sustainable Technology. Sophia is currently working on her MBA at Appalachian State University. She plans on having a corporate voice in the area of solar power and the environment. Age 21. Sophia is the daughter of Bruce and Pam Mazurek.

Violet Delanney Mazurek graduated from The University of Mississippi in Oxford, MS. She has earned an undergraduate degree with a BS in Nutrition. Violet plans to go on to attend PA School and become a Physician’s Assistant. Age 22. Violet is the daughter of Bruce and Pam Mazurek.

Jacob Benjamin Ottinger graduated from Randolph – Macon College with a Bachelor of Arts Degree in Pychology. He began employment as a representative with Centrex Technical Sales upon graduation. Jake is the grandson of John Swezey.

Yesid Mosquera-Perea graduated from the University of Virginia at Wise with a Bachelor of Science in Economics. Yesid has lived with the Hamlet Family for 7 years. He is from Quibdo, Choco Province in Colombia.

Peter Scott Ullstein graduated from the University of the South, Sewanee in Sewanee, Tennessee with a BS in Forestry. While at Sewanee he played 4 years of Varsity Football, was a member of Alpha Tau Omega Fraternity and the University Prescribed Burn Team and co-hosted a weekly radio show on WUTS, the University radio station. His planned Internship with a Professor at the University of Georgia's School of Forestry, to further his education in prescribed burning, was cancelled due to Covid-19 so he is on the hunt for a Plan B!  Scott is the son of Pete and Ashley Ullstein.

Gray Van Dyke graduated from UNC-Chapel Hill. He is the son of Josh & Barbara Van Dyke of Charlotte NC and the grandson of Darlene Van Dyke.