On a sultry day in July 1841, George Washington Dame came to Henry County from Danville to check on the state of the Episcopal Church.  Shortly after, the church was organized and Wellington E. Webb became the rector followed by Dr. Anderson Wade in 1847.  Overcrowding in Spring of 1892 precipitated the building of a new church structure at 321 East Church Street.  The completed church was consecrated on May 5, 1903 by the Rt. Rev. Alfred M.Randolph.  In 1953 a large modern kitchen was added, followed by renovation and remodeling of the chancel and nave, and the addition of the narthex in 1963.  During 1985 the church underwent further remodeling, including the addition of  a columbarium with 156 niches. 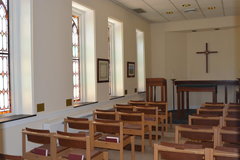 Adjacent to the columbarium is All Saints’ Chapel dedicated in 1986 to the memory of Lucy Brown Coleman, a daughter, wife and mother of Christ Church parishioners, whose family continues as active members as her legacy. This chapel offers an intimate setting for a variety of services. Each Wednesday at noon services are offered, variously, of Noonday Prayers, Holy Communion and a Litany of Healing. Because of its proximity to the columbarium, this space is uniquely suited for family gatherings or as a place for quiet solace. 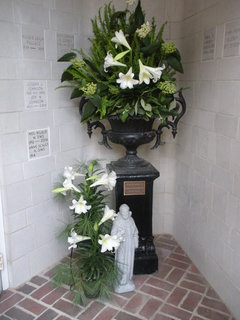 There is a large and understandable measure of comfort to be drawn from the ancient practice of burial within the confines of the church.  With the passage of time, burials have moved away from the church.  The idea of a Columbarium has been declared an expression of Christian faith and love which brings a measure of assurance and quiet peace to us all in our resurrections faith.  When earthly life has ended and the body has passed on to eternal life, the cremated remains of the deceased may be buried at Christ Episcopal Church, where all of the sacraments are regularly observed.  Concerned with its ministry to its parishioners and wishing to provide dignified Christian burial at a nominal cost, Christ Episcopal Church offers the privilege of burial in a Parish Columbarium.

The practice of cremation is totally consistent with our understanding of the Christian faith and the beauty of this Columbarium will continue to proclaim our faith in the resurrection of the dead.  Placement of the cremated remains will be done only as a part of a religious service within the context of the Burial Office of the Book of Common Prayer.

The use of the Columbarium is open to all members of Christ Church and their families.  Each niche may accomodate the remains of no more that two persons, and will be inscribed with name, dates of birth and death.

The church Undercroft is equipped with a large, modern kitchen and wonderful meeting space.  Meals are prepared and served with ease and meetings are frequently held in this space.  Additional appointments to the Undercroft include a piano and pictoral history of Christ Episcopal Church.  Also housed in the Undercroft of the church is the Choir Room, Chapel and nursery.

One of the prominent features of our church building is a bell tower as can be seen on the left of the church in photographs. Being located near the center of Martinsville city, Christ Church has taken the role of being a signal to the community. During the 1950’s, 60’s and 70’s the tower sounded chimes over an electronic speaker system. In 1983, a family loyal to the church, donated a set of cast bells which now serve as a true herald sounding great peels in times of celebration and somber tolls in times of sadness while faithfully reminding the town of the time of day with hourly chimes.

Recently, through a generous grant and maintenance sources, the tower has been restructured and reroofed so that it will stand for many years to come.